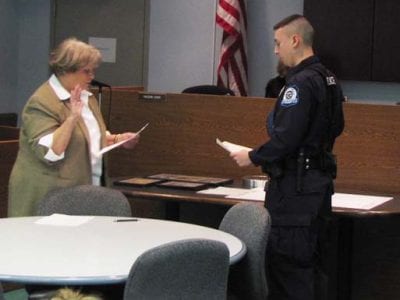 BUCKEYE LAKE – Mayor Peggy A. Wells administered the oath of office to Police Officer Jeremy Jackson on January 14. Jackson is the first new officer added to the force since Police Chief Vicki Wardlow took over. He was extensively vetted by Chief Wardlow. Jackson currently serves in the Army Reserve as a military police officer. He has two years […]

A memorial service, celebrating the life of Ozella G. Welch, 93, formerly of Upper Arlington, will be held at 7:00 p.m. on Tuesday, February 12, 2019, in the chapel of The Thornville home of Hoskinson Funeral and Cremation Service, with Pastor Matt VanWinkle as celebrant. Inurnment will follow at a later date in the Oakdale Cemetery, Marysville. Ozella passed peacefully […]