Events Dawes Arboretum – Ohio 13, three miles north of I-70. Beaded Bugs- Saturday, Sept. 7, noon – 3 p.m. Beading is extremely popular right now and you can join the fun! Create a beaded butterfly, based on the real species, at this beginner’s level class. The hands-on, step-by-step instruction class will give you one-on-one time with the teacher, provide […]


NEWARK – The 28th annual “Lite the Nite Car Show,” Ohio’s premier car show, returns to Newark’s downtown Square on Saturday, Sept 7. Some 500 to 600 vehicles, including antiques, vintage, street rods, classics, motorcycles, and specialty cars, are expected to participate. The show is open to all types of vehicles of all vintages and was voted the #1 Downtown […]


Editor: Current Kirkersville acting Police Chief Milton (Eric) Sayatovich was an officer in Alexandria in June, 2009. He was also the subject of complaints there when a woman said the Attorney General’s office (in 2009) gave her information that Sayatovich was “not up-to-date on his certifications and should not be permitted to carry out duties.” According to a news story […] 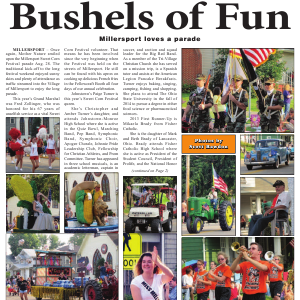